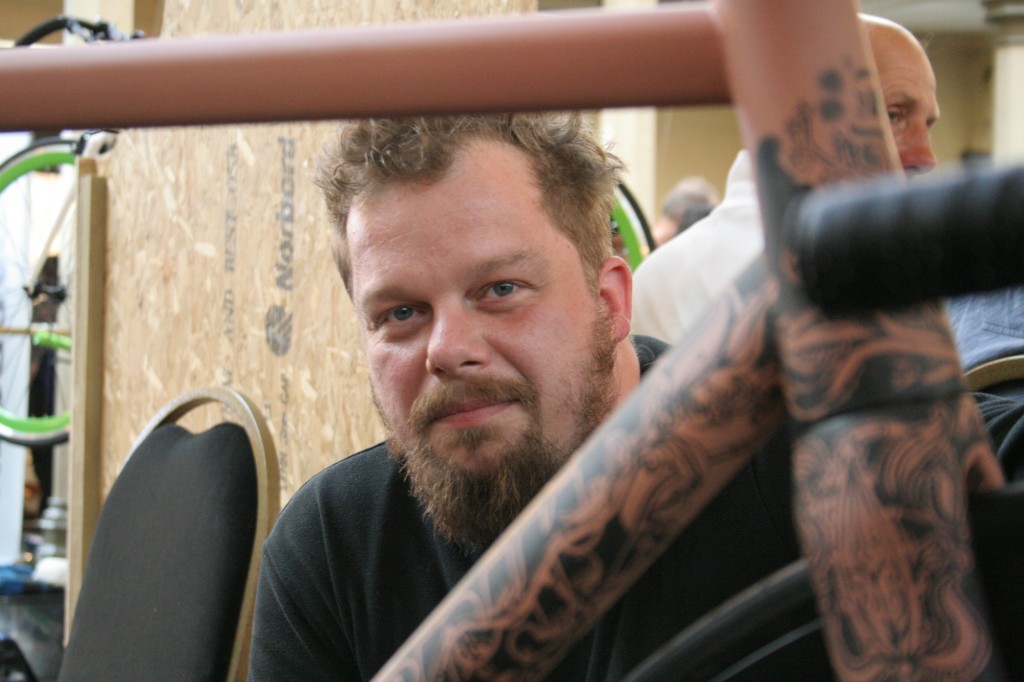 For a whole different take on earning a living by making bicycles, talk to Dániel Merényi. Nine years working as a graphic artist and art director in an advertising business in his native Hungary made good money but left him with “no life” and, anyway, in advertising “it’s not your art”.

Four years in Italy learning to build bicycle frames was more like a life, and he returned home in 2011 to start his own frame shop, making a dozen bikes in 2013 and 35 last year. But now he’s changing tack again; for the firs three years, he says, he had “a crew”, but it didn’t really work; to make money it’s necessary to follow “a narrow path”, which is very restrictive – and in the end you don’t have much money and lose control of the creative side of the undertaking.

But with an income as a comic artist he can afford to be creative. Given his background, it’s no surprise to see some indulgence in the paint – at Bespoked he showed a skin-coloured track bike lusciously decorated in blue – recalling the intimately personal touch of an intricate tattoo, and also a work in progress, being done with a small brush Merényi had to hand. His next goal, he says, is to have his own paint booth – a $10,000 proposition and he has “no idea” when he’ll earn that back.

Hopefully, he says, after another four or five years the business will have its own momentum “and I’ll be happy.”

In the meanwhile, he notes, in Hungary if you follow the rules and pay all your taxes you’ll never make money. So the question is, how far do you push it? Well, he says, I’m not that kind of guy…